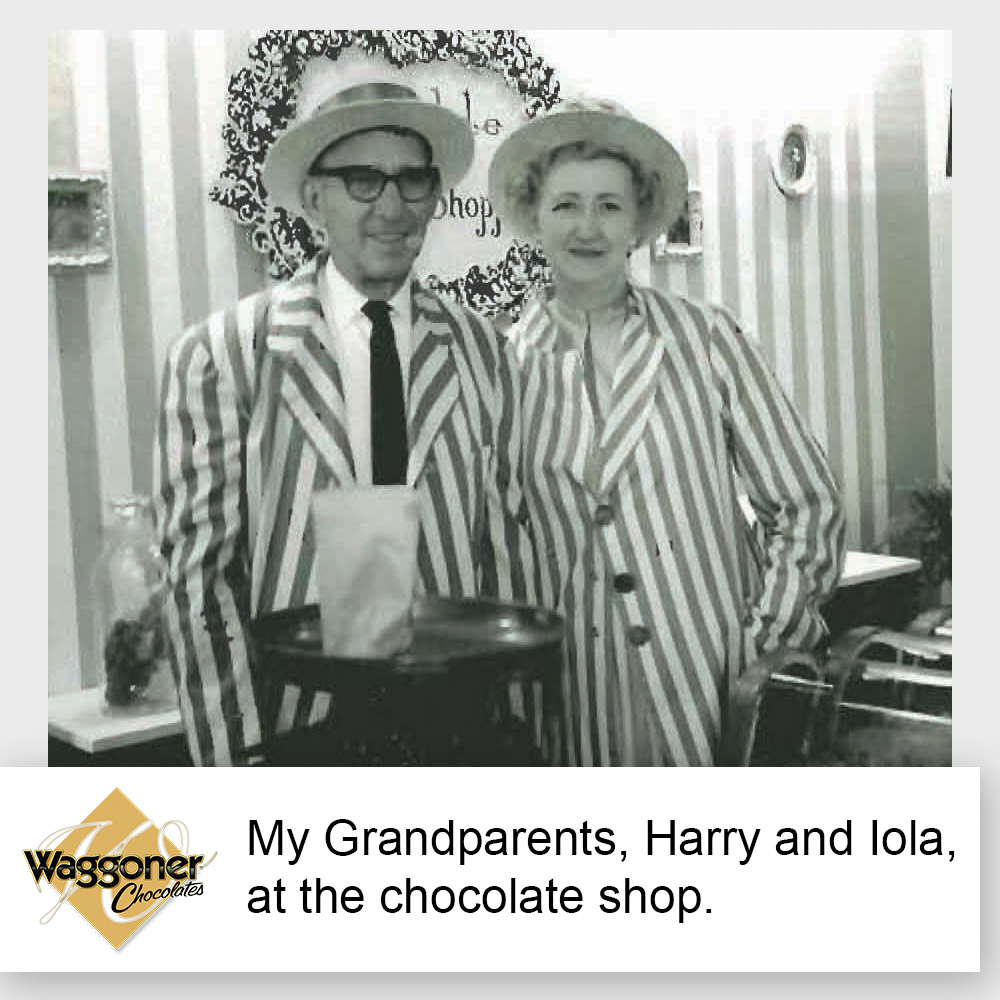 The eldest of eight children, Harry Alfred London quit school in the fourth grade to help support his family as a   steel worker for a company that would later become Republic Steel Corporation. As a young man, Harry moved   from the family home in Reynoldsville, Pennsylvania to work in the mill, but in his spare time, continued his   father, Gilbert's tradition of making handcrafted chocolates as Christmas gifts, using the London family recipes   that had been handed down from generations, stretching back to European roots. 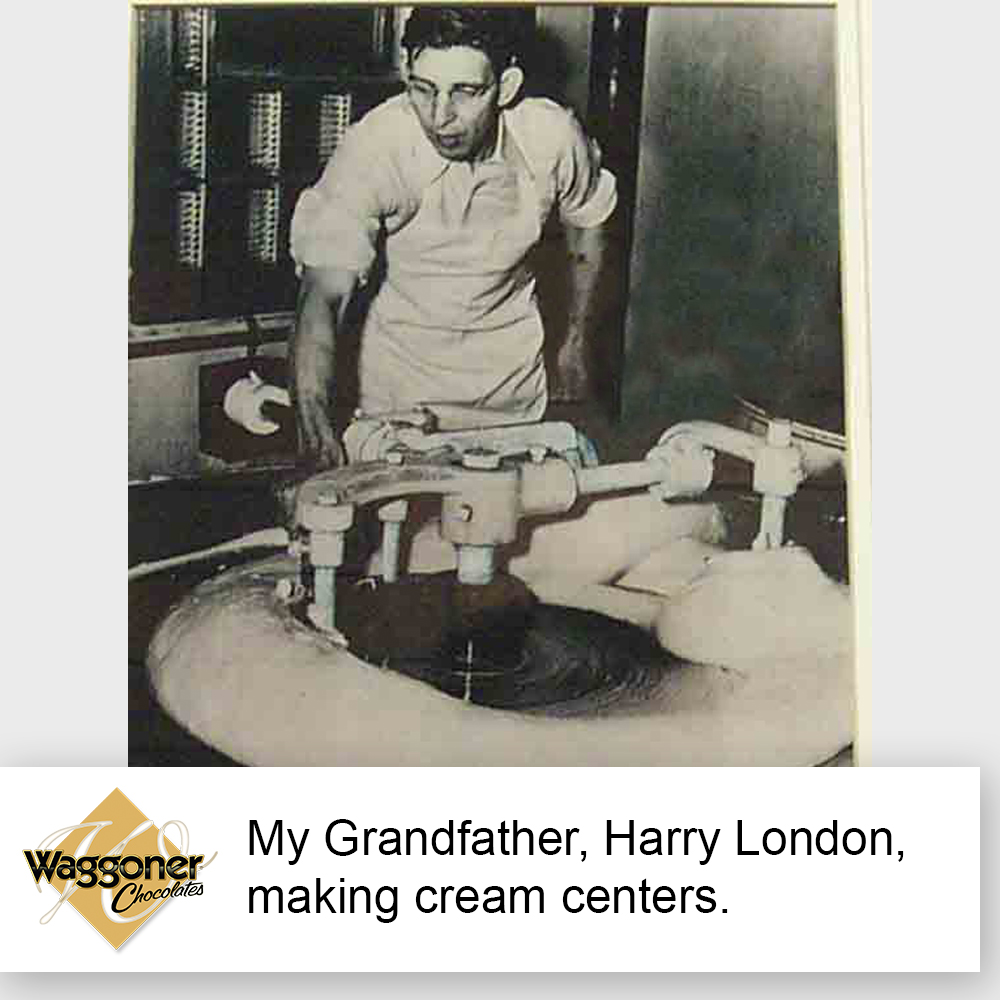 Harry's chocolates were so well received by family and friends that, at the urging of his father, the ambitious 22 year old quit his job at the mill and began today, decades later, a humble chocolate business in the basement of his Canton, Ohio home in 1922. In addition to possessing the skills of a master chocolatier, Harry also began building his own equipment to aide in the process of making his confection masterpieces. Some of his equipment is still in working order. 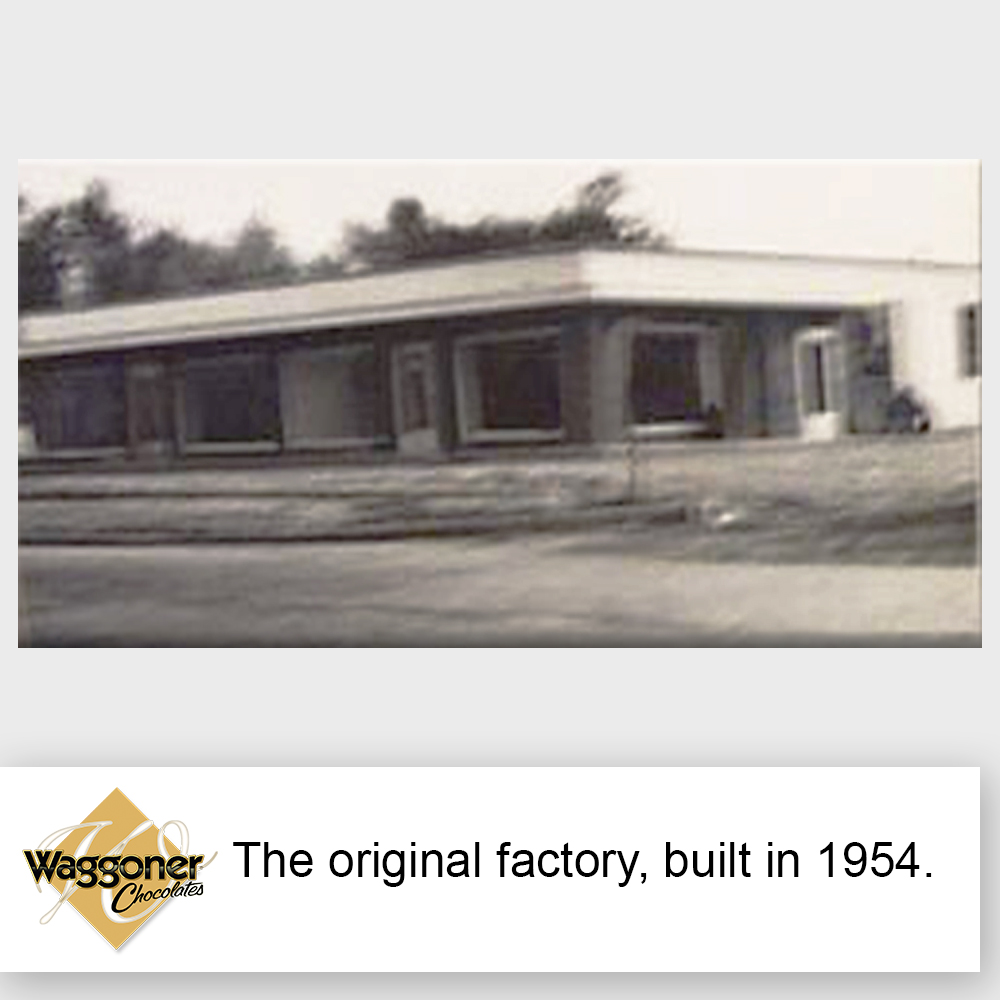 After the death of Harry's first wife, in 1943, he married Iola Campbell, and together, they began growing the thriving business. When their home, located on 21st Street in Canton, burnt down in 1954, the couple built their first London's Candies factory located at 1281 South Main Street in North Canton. 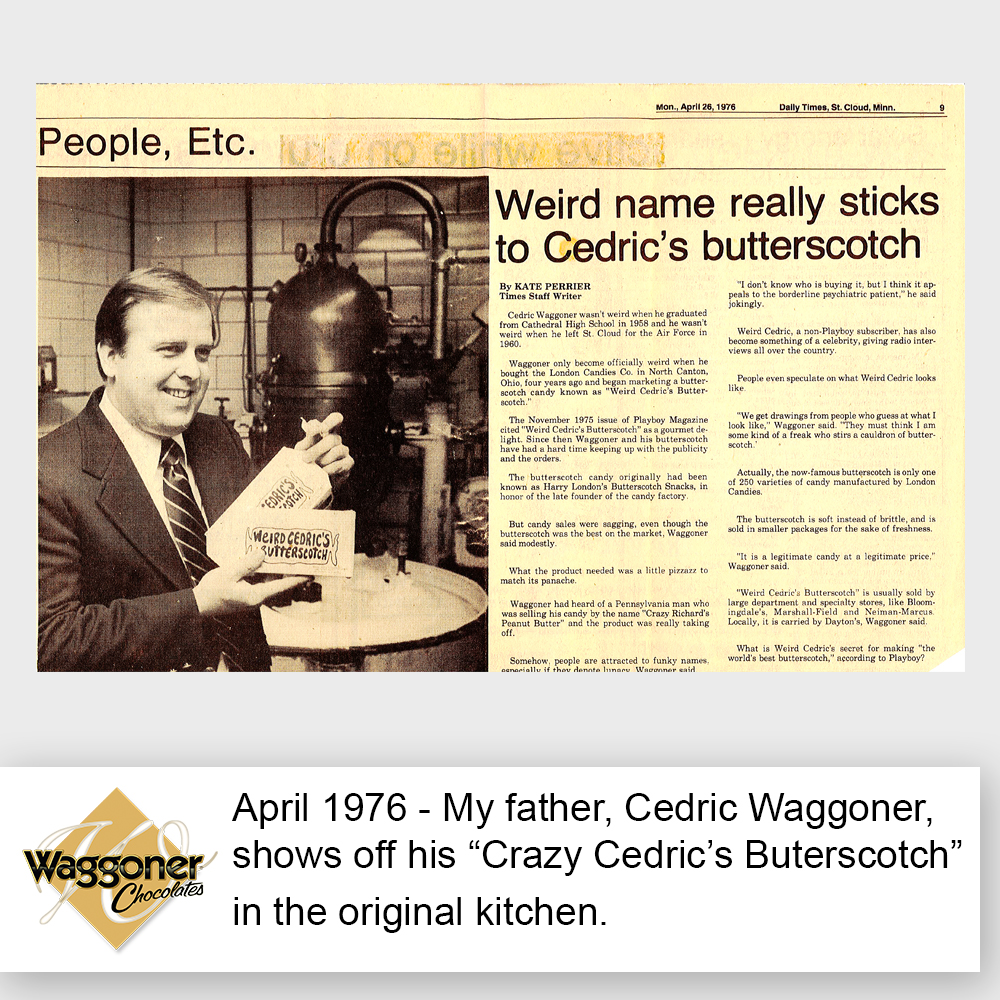 Shortly before his death, in 1969, Harry made the decision to add his son-in-law, Cedric T. Waggoner and step-daughter, Bonnie to the leadership of  the chocolate company. Over the next two decades, Bonnie and Cedric would take the company to the next level, adding industry leading products, thus developing the "Gift of Chocolate." The dynamic duo expanded with the addition of factory locations,  international sales and ultimately making London's Candies a household name across the globe, but they didn't do it alone! Their three children, Mercedes, Cedric "Joe," and Allison joined the team in the late 80's and 90's. 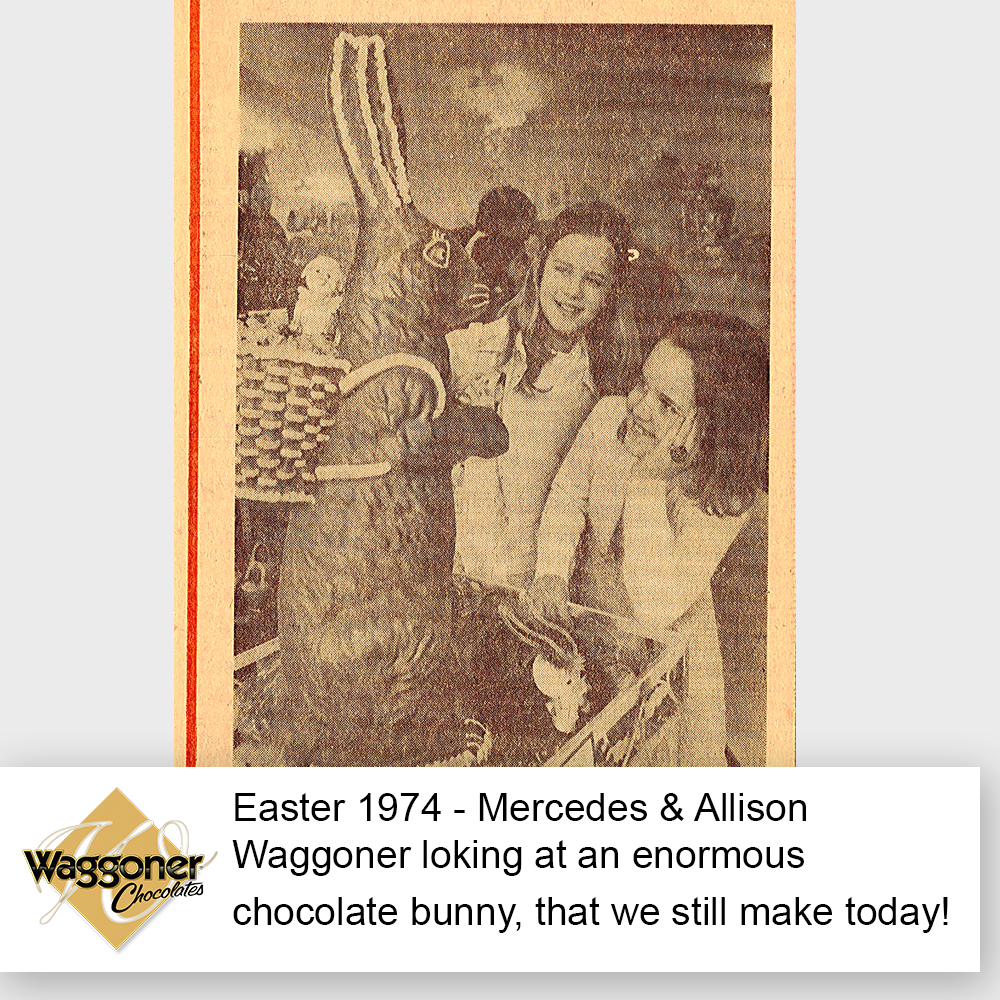 Revolutionary product lines, industry leading designs and multi-million dollar ventures soon became the family's reality. Mercedes and her husband, Peter Young, led the team with exceptional negotiation and business expertise, while Allison and her father Cedric lead the increasing sales force. Joe Waggoner was instrumental in modernizing the plant. He grew up in the business, but after a four-year stint in the Army returned in 1987 and recognized that the company could no longer perform so many functions manually and remain competitive. He studied new technologies used around the world and began to incorporate them into Harry   London's efforts to automate some of its systems, while retaining the key, handmade steps in the chocolate-making process.   Many of the technologies that Joe utilized were not even designed for candy making but helped to develop revolutionary products, like the Buckeye!

The family continued to evolve and expand the company until its sale in 2003. It was then that Joe Waggoner made the decision to independently carry on the family tradition by opening Waggoner Chocolates in the original family factory, built by his grandparents in 1954. 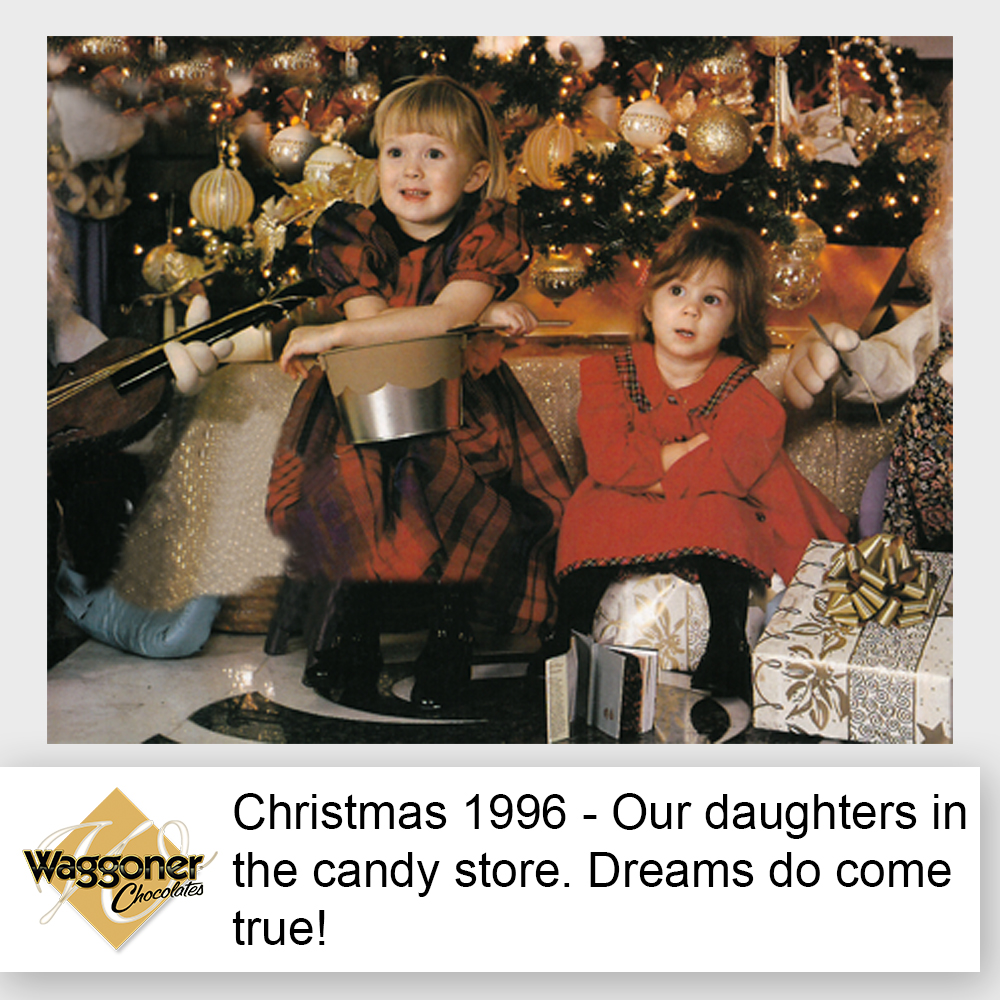 Today, Waggoner Chocolates produces more than 100 varieties of bulk and individually wrapped chocolates and seasonal confections. We sell to customers in all 50 United States, China, Europe and Canada. Our chocolates are made with the freshest, finest ingredients from around the world. At Waggoner Chocolates, we continue our timeless devotion to the worlds most distinguished chocolate connoisseurs by providing quality chocolates and confections that will be cherished for generations to come. We believe in tradition and providing our customers with products and packaging that will be remembered, just as Harry London did nearly 10 decades ago. At Waggoner Chocolates, we truly enjoy and take pleasure in providing customers around the world with the only true "Gift of Chocolate."

Thank you for choosing a quality gift of chocolate.

Join for coupons, specials and more!

Create an account with us and you'll be able to:

Fill in your email below to request a new password. An email will be sent to the address below containing a link to verify your email address.